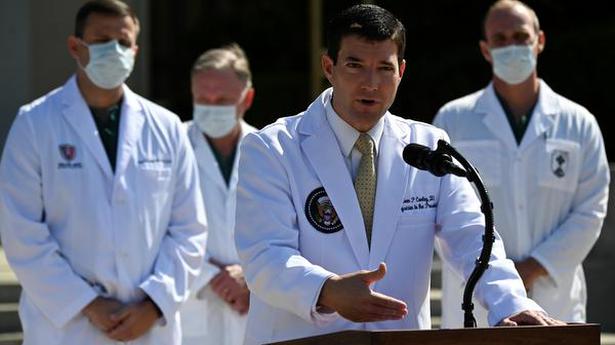 President could be discharged as early as October 5, says Dr. Sean Conley.

President Donald Trump’s blood oxygen level dropped suddenly on October 3, but he “has continued to improve”, the White House physician said on October 4, adding a new layer of confusion to the President’s health status even as he sought to clarify contradictory statements from the day before.

Mr. Trump’s medical team, speaking on the steps of the military hospital where he was being treated for a third consecutive day, suggested that he could be discharged from the hospital as early as October 5.

Navy Cmdr. Dr. Sean Conley acknowledged he was trying to downplay the severity of the President’s condition the day before. “I was trying to reflect the upbeat attitude of the team, that the President, that his course of illness has had. Didn’t want to give any information that might steer the course of illness in another direction,” Dr. Conley said. And in doing so, came off like we’re trying to hide something, which wasn’t necessarily true. The fact of the matter is that he’s doing really well.

Dr. Conley said the President had a “high fever” and a blood oxygen level below 94% on October 2 and again on October 3. The level currently stands at 98%, Mr. Trump’s medical team said.

The medical team still refused to disclose the timing of Mr. Trump’s dip in oxygen or whether lung scans showed any damage.

Mr. Trump offered his own assessment of his status the night before in a video from his hospital suite, saying he was beginning to feel better and hoped to “be back soon”. And he was back on social media early morning on October 4, sharing a video of flag-waving supporters, most not wearing masks, gathered outside Walter Reed National Military Medical Centre.

The changing, and at times contradictory, accounts created a credibility crisis for the White House at a crucial moment, with the President’s health and the nation’s leadership on the line. Moreover, the President’s health represents a national security issue of paramount importance not only to the functions of the U.S. government but also to countries around the world, friendly and otherwise.

Mr. Trump’s Democratic challenger, Joe Biden, pulled his attack ads off the air during Mr. Trump’s hospitalisation, and on October 4, he dispatched senior aides to deliver a largely friendly message.

“We are sincerely hoping that the president makes a very quick recovery, and we can see him back out on the campaign trail very soon,” Biden adviser Symone Sanders said on CNN’s “State of the Union”.

She added: “This is a glaring reminder that the virus is real.”

On October 3, chief of staff Mark Meadows told reporters outside the hospital, “We’re still not on a clear path yet to a full recovery.” In an update on October 4 night, Mr. Trump’s chief doctor expressed cautious optimism but added that the president was “not yet out of the woods”.