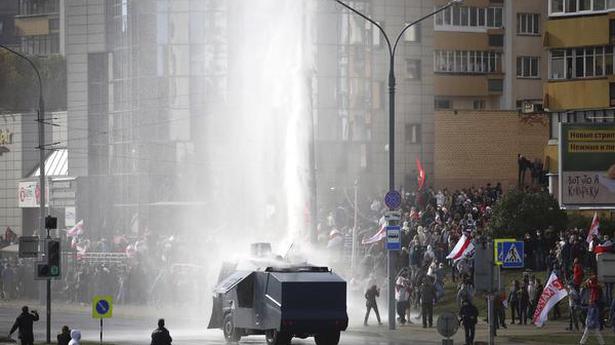 Tens of thousands of people marched through the centre of the Belarusian capital Minsk on Sunday to demand that authorities free political prisoners, prompting police to turn water cannon on them.

The march is the latest in a series of rallies in Belarus since an August 9 election, in which President Alexander Lukashenko claimed a landslide victory. His opponents say it was rigged to hand him a sixth term in power.

The crowd, waving white flags with a red stripe, which have become the symbol of the Opposition, marched to the beat of drums towards detention centres, pictures posted on social media showed. “Let them out,” the crowd chanted outside the Okrestina detention centre, where some protesters and Mr. Lukashenko’s opponents are believed to be held.

Mr. Lukashenko is struggling to contain nearly two months of street protests that pose the biggest challenge to his 26-year rule. More than 13,000 people have been arrested and major opposition figures have been jailed or exiled.