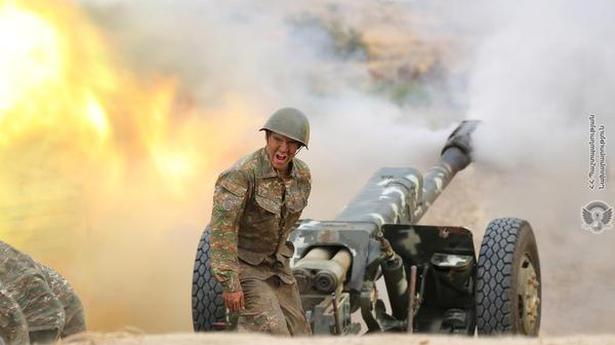 Civilians among the injured as countries intensify shelling, defy international calls for a ceasefire

Armenian and Azerbaijani forces intensified their shelling on Thursday despite fresh calls from world leaders for an end to days of fighting over the disputed Nagorny Karabakh region that have left nearly 130 dead.

Police also deployed in large numbers in the streets of Stepanakert, the capital of the breakaway province, after two explosions, as drones buzzed overhead and sirens sounded during the night.

The rival Caucasus nations have been locked in a bitter stalemate over the Karabakh region since the collapse of the Soviet Union when the ethnic Armenian region broke away from Azerbaijan.

The fiercest clashes between Armenian and Azerbaijani forces in years over the region ignited on Sunday and confirmed deaths neared 130 as fighting raged for a fifth day.

The two sides have accused the other of shelling civilian areas.

Armenia has recorded the deaths of 104 soldiers and eight civilians. Azerbaijan hasn’t reported any military casualties but said 17 civilians were killed as a result of Armenian shelling.

A reporter and photographer working for the French daily Le Monde have been wounded in the fighting.

Armenian Defence Ministry spokesman Artsrun Hovhannisyan said fighting had “intensified” in the morning following fewer exchanges at night and that its troops had repelled Azerbaijani attacks.

The Hindu Explains | What’s behind the Armenia-Azerbaijan clashes?

He claimed that Armenian forces inflicted “enormous losses” over the night and into the morning, killing 350-360 Azerbaijani troops, downing three helicopters and destroying 15 armoured vehicles as well as drones.

Azerbaijan’s Defence Ministry, in turn, said its forces had carried out “crushing artillery strikes against Armenian forces’ positions in the occupied territories” during the night.

It denied claims by Yerevan that one of its helicopters had been downed, crashing in Iran and said that fighters on the Armenian side had been “forced to retreat from previously held positions along the entire stretch of the frontline.”

Russian President Vladimir Putin and his French counterpart Emmanuel Macron issued the most recent call for a halt to fighting.

Amy Coney Barrett and the Triumph of Phyllis Schlafly