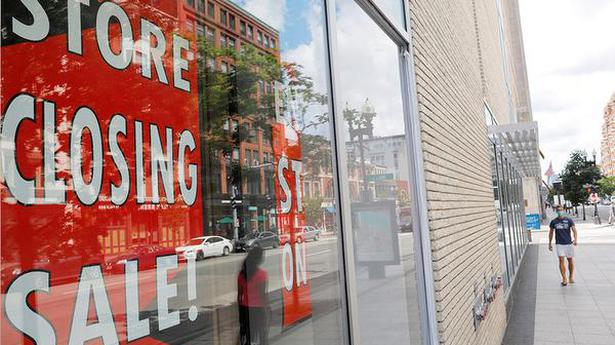 U.S. employment growth slowed more than expected in September and more than 3,00,000 Americans lost their jobs permanently, dealing a potential blow to President Donald Trump ahead of the fiercely contested Nov. 3 presidential election.

The Labor Department’s closely watched employment report on Friday underscored an urgent need for additional fiscal stimulus to aid the economy’s recovery from a recession triggered by the COVID-19 pandemic. The slowdown in hiring compounds problems for Mr. Trump, who announced that he had tested positive for coronavirus.

Just over half of the 22.2 million jobs lost during the pandemic have been recouped. Former Vice President Joe Biden, the Democratic Party nominee, blames the economic turmoil on the White House’s handling of the pandemic, which has killed more than 2,00,000 people and infected more than 7 million.

“The jobs report adds to Trump’s woes,” said James Knightley, chief international economist at ING in New York. “Betting odds signal a diminished chance he will win re-election and a much higher probability of a Democrat clean sweep.”

Non-farm payrolls increased by 6,61,000 jobs last month, the smallest gain since the jobs recovery started in May, after advancing 1.489 million in August.

Every sector added jobs with the exception of government, which shed 2,16,000 positions because of the departure of temporary workers hired for the Census and lay-offs at State and local government education departments as many school districts shift to online learning.

Employment in the leisure and hospitality sector increased by 3,18,000, accounting for nearly half of the gain in non-farm employment. Payrolls are 10.7 million below their pre-pandemic level.

Economists polled by Reuters had forecast 8,50,000 jobs were created in September. Employment growth peaked in June when payrolls jumped by a record 4.78 million jobs.

The unemployment rate fell to 7.9% in September as 6,95,000 people left the labour force from 8.4% in August. The jobless rate was again biased down by people misclassifying themselves as being “employed but absent from work.”

Without this error, the government estimated that the unemployment rate would have been about 8.3% in September. There were 3.8 million people who had lost their jobs for good, up 3,45,000 from August. More experienced long bouts of unemployment, with the number of people out of work for more than 27 weeks surging 7,81,000 to 2.4 million.

The slowing labour market recovery is the strongest sign yet that the economy has shifted into lower gear heading into the fourth quarter. Growth got a boost over the summer from fiscal stimulus. Third-quarter gross domestic product growth estimates are topping a 32% annualized rate, which would reverse a historic 31.4% pace of contraction in the April-June quarter.

Growth estimates for the fourth quarter have been cut to about a 2.5% rate from above a 10% pace.

“The virus is in the driver’s seat in controlling the speed of the recovery and right now the economy is in the slow lane unless Congress and the White House can settle their differences and provide additional stimulus,” said Chris Rupkey, chief economist at MUFG in New York.

“They Have Right To Be In A Family”: Pope Supports Same-Sex Civil Unions